As I said yesterday: yelp. Today, more subtly. This is bad news, and I think it shows how dangerous Osborne’s Buy Help to Buy scheme will be.

Here is the long term performance of Construction employment versus Real Estate Services employment in toto and relative to 2008 for ease of comparison. 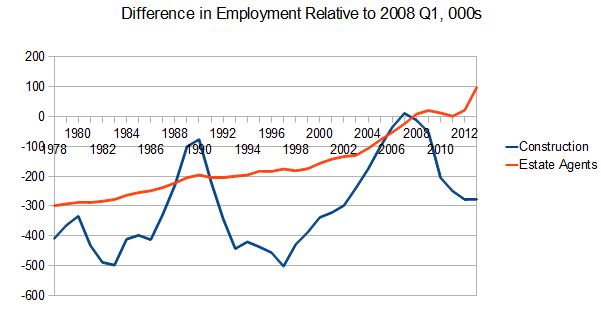 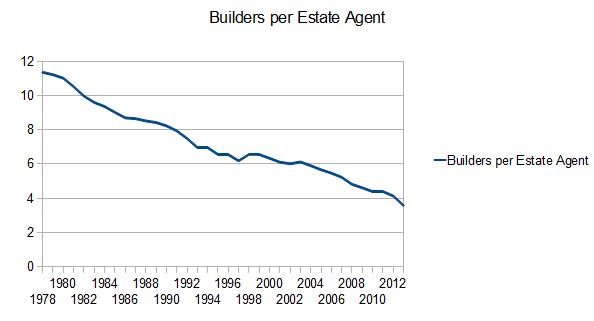 Maybe, then, we should all calm down and have a nice cup of tea. Three things suggest we shouldn’t be worried.

1. We can see a relatively steady total number of those in construction with large cyclical swings and steady, relatively cyclically resilient growth in estate agents. In this sense yesterday’s revelation that construction has lost 277,000 jobs since 2008 while estate agents have gained 77,000 is unremarkable.

2. What can’t go on forever won’t. At this rate, by the end of the decade there will be as many people involved in selling and managing property as building them. This is not sustainable, so whatever you think of this trend, it will stop and probably soon.

3. We aren’t seeing a damaging sectoral shift. This isn’t just Baumol’s cost disease in action. Productivity in both sectors has been a bit meh. About 15% up since 1990, according to ONS figures (GVA/Jobs Construction, Real Estate Services). So we aren’t moving from high productivity industries to low. The effect on headline growth should be minimal.

But you’re not here for the reasonable commentary are you? No, four things suggest we should be more concerned.

1. There’s no sign of the housing crisis abating. We can’t build enough houses with that many people. And in the past it has taken many years to reattain peak employment in construction. From the mid-90s to mid-00s this process took almost a decade.

2. There’s no sign of the employment crisis abating. Construction could absorb a third of the extra unemployed and still leave room for more to deal with the UK’s infrastructure and housing gap.

3. This isn’t Baumol’s cost disease, it’s worse. Construction creates structures we all use. estate agents, at least those involved in renting properties provide relatively more services and generate income to the wealthy. An increase in estate agents relative to Builders suggests a shift in economic activity away from serving the majority and towards the elite. And finally:

4. Employment predicts economic activity. Osborne’s Help to Buy is likely to goose the housing market in a way that damages the economy, but helps Tory voters. The stagnation of construction but the growth in estate agents signals that Help to Buy won’t get many homes built, but it will increase housing transactions, prices and the Buy to Let market.